English
You are here: Home » News » Industry News » Structure and physicochemical properties of vitamin A

Structure and physicochemical properties of vitamin A

Structure and physicochemical properties of vitamin A

Vitamin A refers to all compounds with retinol biological activity. There are two kinds of substances that can provide retinol bioactivity. One refers to retinol, its metabolites and synthetic analogues with similar structures. This kind of substances is also called retinoids, also known as preformed vitamin A. the main dietary sources are retinol and retinoyl esters contained in animal foods. Another kind of substance is vitamin a protocarotenoids, which refers to carotenoids from plant foods that can be converted into retinol in the body. They are precursors of dietary retinol, mainly including β- Carotene α- Carotene and β Cryptoxanthin.

Vitamin A is a group of 20 carbon structure with a β- The violet ketone ring, a side chain composed of four isoprenoid units connected head to tail, and a molecular set combining a hydroxyl (retinol), or aldehyde (retinol), or carboxylic acid (retinoic acid), or ester (retinol) at the carbon-15 position. Carotenoids are polyisoprene compounds or terpenoids. More than 600 forms of carotenoids have been found in nature, of which only some have vitamin a pronutritional activity, but only those with dietary vitamin a significance β- Carotene α- Carotene and β- There are three kinds of cryptoxanthin. All trans isomers are the most common and stable form of each kind of carotene, but there are also many cis isomers. Carotenoids usually contain 40 carbon atoms, have a wide range of conjugated double bond systems, and have one or two ring structures at the end of its conjugated carbon chain. Lycopene is an exception. It has no ring structure and no vitamin A activity. Vitamin A is a fat soluble vitamin, which can be dissolved in most organic solvents to varying degrees, but is insoluble in water. Vitamin A and its derivatives are easy to be oxidized and isomerized, especially when exposed to light (especially ultraviolet light), oxygen, active metals and high temperature environment, which can accelerate this oxidative damage. However, the general cooking process will not cause too much damage to vitamin A in food. Under ideal conditions, such as low temperature freezing, retinoids in serum, tissue or crystalline state can remain stable for a long time. In the absence of oxygen, retinol is relatively stable to base, but unstable in acid, dehydrogenation or rearrangement of double bonds can occur. In the process of rancidity, vitamin A and carotene contained in oil will be seriously damaged. Phospholipids, vitamin E or other antioxidants in food can improve the stability of vitamin A. Among the derivatives of vitamin A, retinoic acid and retinoyl ester have the best stability. 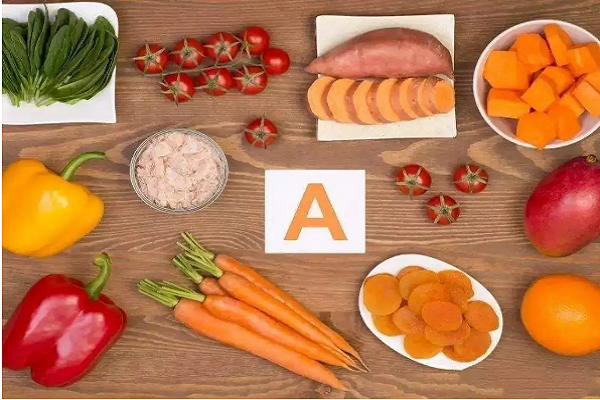 Retinol and other retinoids have continuous conjugated double bonds, which can produce unique ultraviolet or visible absorption spectra. The maximum absorption wavelength in ethanol is 325nm for all trans retinol, 381nm for all trans retinol, and 350nm for all trans retinoic acid. Retinol can produce 470nm fluorescence under UV irradiation at 325nm wavelength. At present, the most common retinoid detection method is to use the above characteristics, using reverse phase high performance liquid chromatography with UV / fluorescence detector. Vitamin A is mainly stored in the liver in the body, accounting for about 90% - 95% of the total, and a small amount exists in adipose tissue.

β- The molecular formula of carotene is C40H56, and its molecular weight is 536.87. Its molecular structure has many conjugated double bonds, which can absorb some spectra in visible light and make it show special colors. At the same time, it has a strong ability to quench reactive oxygen free radicals, which can reduce the antioxidant damage of the body and play a role in disease prevention. β- Carotene molecules are actually retinol molecules connected by two tails, which can be converted into two or one vitamin A through central cleavage or eccentric cleavage. β Carotene is also divided into all trans and cis isomers. All trans β- After central cleavage, carotene can produce two molecules of all trans retinol (vitamin A), CIS β- The yield of carotene converted to vitamin A is low.

β Lutein, also known as β- Cryptoflavin β- Carotene-3-ol is an oxygenated lutein carotenoid with molecular formula c40h56o and molecular weight 552.87. And β- Compared with carotene, β- The molecular structure of cryptoxanthin is that a light group replaces the original hydrogen atom at position 3, and its molecular ratio β- Carotene has one more oxygen atom, resulting in β The structural change of one ionone ring may make this half molecule lose vitamin A activity, so β Cryptoxanthin and α- Like carotene, the yield of vitamin A is only β- Half of carotene. In addition to vitamin A activity, β Cryptoxanthin also has strong antioxidant activity.

Carotenoids in the diet are relatively stable and less damaged during cooking, and food processing and heat treatment help to improve the release and absorption of carotenoids in plant cells. However, long-term high temperature, especially under the conditions of aerobic and ultraviolet radiation, will significantly increase the loss. The preservation rate of carotene in Chinese cooking methods is 70% - 90%.