Although vitamin A can be extracted from animal tissues, the resources are relatively scattered, the steps are complicated, and the cost is high. Therefore, commercial vitamin A is a chemical synthetic product. The industrial synthesis of vitamin A at home and abroad mainly includes two synthetic processes: Roche in Switzerland and BASF in Germany. The former with β- With ionone as the starting material and Grignard reaction as the characteristic, vitamin A acetate was synthesized through Darzens reaction, Grignard reaction, selective hydrogenation, hydroxyl Bromination and dehydrobromination; The typical feature of the latter is wittng reaction. Its synthesis route is shown in the figure "vitamin a synthesis by BASF method", which is based on β- Ionone is used as the starting material to produce acetylene through Grignard reaction with acetylene- β- Violet alcohol, selective hydrogenation to ethylene- β- Violet alcohol, after wittng reaction, is condensed with C 5 aldehyde to form vitamin A acetate with sodium alcohol as catalyst.

Determination of vitamin A

The common methods to detect vitamin A mainly include colorimetry, UV spectrophotometry, near infrared spectroscopy and high performance liquid chromatography. The principle of colorimetric determination of vitamin A is based on the fact that vitamin A can react with various acids to produce blue purple to peach colored compounds. The blue compounds generated by vitamin A and antimony trichloride chloroform solution (or trifluoroacetic acid chloroform solution) have characteristic absorption at the wavelength of 620nm, which is a sensitive method used earlier. With the development of UV spectrophotometry and high performance liquid chromatography, this method has been rarely used for quantitative detection, only for qualitative detection. The principle of UV spectrophotometry is based on the maximum absorption of vitamin A at the wavelength of 325 or 328nm. Near infrared spectroscopy is based on the fact that vitamin A has two relatively stable characteristic absorption peaks at 1721 and 1872nm wavelengths. High performance liquid chromatography is usually based on the characteristic absorption of vitamin A in the ultraviolet region and the natural fluorescence characteristics of vitamin A.

Dry eye is one of the typical clinical features of vitamin A deficiency. According to the specific ocular manifestations, dry 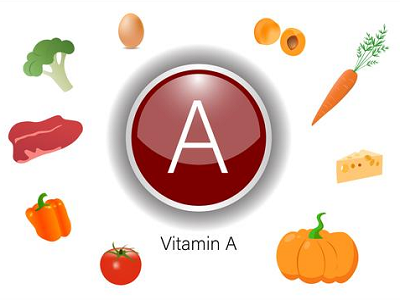 eye can be divided into several stages. Xn stage is the earliest stage, mainly night blindness caused by the impairment of dark adaptation function. After x1a, goblet cells secrete less mucus, resulting in conjunctival dryness; The next stage is x1b, in which vesicular Pitt's patches appear on the frontal surface of the conjunctiva. X2 stage is the progressive stage of the disease, which shows simple corneal dryness. When the cornea softens, ulcers, or both liquefaction processes occur, it is X3 stage. At this time, if the liquefied surface is less than 1/3 of the corneal area, it is x3a stage, and if it is greater than 1/3, it is x3b stage. Eye damage caused by corneal softening is called dry eye disease, fundus disease, also known as XF stage.

Other manifestations of epithelial dysfunction

Hair follicle thickening (hair follicle keratinization) is a skin characterization of vitamin A deficiency. Mucin production in mucosa decreases, and the morphology, structure and function of mucosa are abnormal, which can lead to pain and the decline of mucosal barrier function, and can involve the mucosa of throat, tonsil, bronchus, lung and digestive tract. Vitamin A deficiency and marginal deficiency lead to increased risk and mortality of infectious diseases in children.

Vitamin A deficiency can damage embryonic growth. Experimental animals that are seriously deficient in vitamin A often have embryo absorption, and the surviving embryos will also have malformations of eyes, lungs, urinary tract and cardiovascular system. When the human body is deficient in vitamin A, there are less morphological abnormalities, but abnormal lung function can be seen.

Vitamin A deficiency can lead to a decrease in the number of blood lymphocytes, natural killer cells and specific antibody responses. When vitamin A intake is insufficient, it can be observed that the number of leukocytes decreases, the weight of lymphoid organs decreases, T cell function is damaged and the resistance to immunogenic tumors decreases. In laboratory animal and human experiments, vitamin A deficiency often leads to abnormal humoral and cellular immune functions.